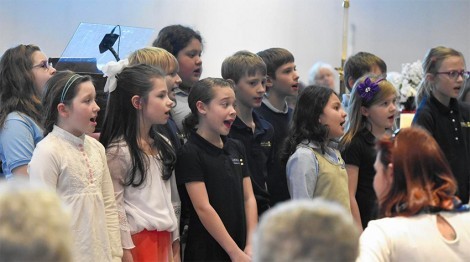 Children and seniors joined together to sing and pray, while learning about Cuba, at the annual World Day of Prayer held at Carroll Lutheran Village.

The assisted living home holds a World Day of Prayer service every year, but this year they invited fourth- and fifth-graders from the Carroll Lutheran School to help lead the service.

The ceremony started with fourth-grader Jackson Johansen lighting candles at the altar, followed by a processional of young girls and adult women. The girls each represented a person from a different region of Cuba and read a small passage written by Cuban Christians.

Each child had a role to play during the service, in addition to Johansen, who served as the ceremony’s acolyte.

There were testimonials read by fourth-graders Kerigan Ross, Camryn Cruz and Clara Kelley, and skits that highlighted the service’s lessons performed by six fourth- and fifth-grade students.

Children also helped as greeters, helpers or ushers, handing out pencils or service pamphlets. The children also all sang two songs, including “He’s Got the Whole World in His Hands.”

It was a chance for the children to take on leadership roles within their Christian faith, and they were pleased with their jobs, said Karen Ganjon, administrator of Carroll Lutheran School.